Memories of a mom who broke the code 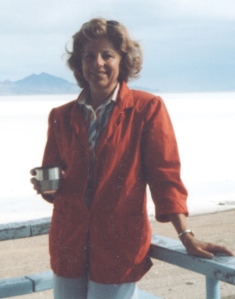 This Mother’s Day is a challenge, to say the least. I lost my mother just after New Year’s, and today looms large in my heart. She was not the perfect mother, thank god, for she showed us what it meant to be human–to struggle, to fight, to fail, to win, to dance (wildly with abandon at times), to be crazy with jealousy, but also to love, to give, to cherish her children, and above all to maintain grace and dignity. Especially when she was ill and in pain, and then in death. In short, she broke “the code” of what mothers were supposed to be in the 50s and 60s.

She was a talented, bright woman who had a somewhat entitled upbringing and a private school education. She studied ballet, piano, Latin, French, and opera singing. She had a beautiful soprano voice, a talent she was most proud of against her mother’s contralto. Her mother had dreams of sending my mom off to Vassar or Smith College, but Mom chose the University of Chicago, where she was accepted into the Hutchins program at age 16. Her mother was devastated. Her father secretly was thrilled that she chose the courage of her convictions.

The first time she called home, her mother couldn’t hear her very well and thus began my grandmother’s lifelong deafness in one ear. Talk about guilt. You don’t need to be a shrink to ponder the meaning of that one. I don’t think my grandmother ever forgave my mom for ruining her dreams, forget about what my mom may have wanted. I can’t imagine having lived with that all my life, but my mom did.

When my parents got married, they were determined to live a life very different from their well-to-do parents. They wanted to travel the world, live on the spur of the moment, write, play piano, sing, and sail. Suddenly, too suddenly as they were so young, there were two children. All plans of serendipity went out the window and they settled down to a stable and secure suburban life, something that nearly killed my mother a couple of times. When I was born five years later, my mother knew she was in this life for the long haul. She accepted it (mostly) with grace and had a great time with us kids, even if she fought “what was expected of her” tooth and nail.

During the tense years of our teenage-hood in the 60s and 70s, she managed to hold things together pretty well, but she also had a number of meltdowns. Who didn’t? But most parents during that time were able to deny or hide the problems all too well. They suffered in silence thinking they were the only ones going through hell and doing their darnedest to maintain their suburban images: two-car garages, pristine lawns, cocktail parties, family Thanksgivings, weekend sailing trips, perfect anniversary celebrations, and above all for her, being the “perfect mom.”  There was a lot of pressure on her to be perfect living in Pacific Palisades where everyone seemed to be perfect.

To this day, I’m so proud of her for “failing” in this task. She couldn’t stand the hypocrisy of it all and refused to play along. Her fiery views on politics, religion, and the outrageous inequalities in life were wonderful to behold in a roomful of “don’t rock the boat” white, upper-middle-class, always-do-and-say-the-right-thing people. I don’t know where she found the courage to break the code over and over, because at that time it was a very lonely and scary road to take. Friends dropped away, and my father grew tired of her passionate “ravings” and just wanted a quiet life. After nearly 40 years of marriage, my father divorced my mother and married a quiet woman 23 years his junior.

Our mother was devastated. Though my parents’ marriage had been tense and rocky, with affairs on both sides and one near divorce in the early 60s, they always came back together. This time was different and somehow Mom knew. So she did what every scorned woman should do in this situation: she moved to Mexico, partied and danced, rode horses, began singing again, and met a man 10 years her junior who just adored her. Though not all roses, she lived one hell of a life in San Miguel de Allende for the last 25 years.

As I think about her today, I’ll remember hundreds of details about her, but the main ones are these: How she was able to live “in the moment” so easily. She was like a cat that immediately owns any place it sits. When she walked into a room, heads literally turned, she was that beautiful. Wherever she went, she belonged. She always said, “just act like you belong and no one will question you.” Her courage, both physical and emotional, was unstoppable. Her beautiful hands and fingers when she played the piano. Singing, singing, singing.

Before she died, I had given her my book and inscribed in it the following words:
“For Mom, you gave me my life and your love. I will always cherish both.”

Missing your beautiful voice and soothing words today, but also knowing that you’re with me inside. Hats off to all moms today.

One response to “Memories of a mom who broke the code”